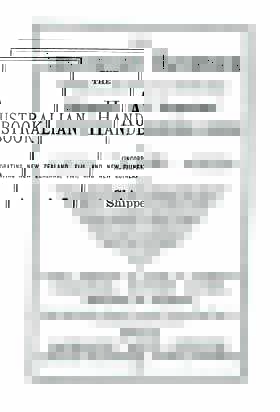 Looking for your ancestors?

Included in this data set of the Australian Handbook are the following:

The Importer's Directory, which takes up over 270 pages, is a comprehensive listing of all importers, manufacturers and shippers. For this importers you will find their name address and what they import (ie. machinery, groceries, hardware, musical instruments, or sewing machines etc.). Lists manufacturers and shippers from places throughout England, Scotland, Ireland, France, Germany, the United States, and importers throughout Australia, New Zealand and Fiji.

"What can I find in this collection?"

This handbook covers the whole Australian region. It is mainly concerned with giving an oversight of each Australian colony and is aimed more at the commercial sector. It has very useful potted histories and maps of each colony as seen in the perspective of 1900.

It contains extensive details of timetables and statistics including: 1904

The gazetteer alone is worth the purchase price. This covers well over 3000 towns and villages throughout Australia and New Zealand in nearly 300 pages. It gives "particulars as to situation, population, means of communication, hotels, churches, trade, manufactures, etc".