What can these records tell me? 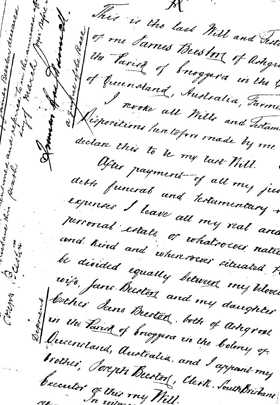 This collection includes transcripts of entries from the index of intestacies, insolvencies, and wills from Queensland. The records pertain to the year range of 1859 to 1900.

Transcripts may include the following details:

Discover more about these records

This database is a wonderful genealogy tool, indexing all the notices in the Queensland Government Gazette relating to intestacies, insolvencies and wills (and, where found, other associated notices). Several lunacy notices have also been included, as they were handled by the same office as intestacies and insolvencies.

Where individuals have been appointed as executors, but not in an official capacity, they have been indexed. Often accountants or solicitors were appointed to act as trustees or as attorneys for intestate or overseas executors or administrators. Mostly the same name does not occur too frequently and so these have been indexed - for those who have these as ancestors it will give a glimpse of their business.

Often the notice in the Gazette includes additional information to that listed in this index, in particular street addresses are sometimes given and it was not always possible to include these in the limited space available. Sometimes the information given in a series of notices appears to be contradictory. We have indexed the details as given in the notices - it is the task then of the researcher to determine which is correct.

Three Courts existed in Queensland during this time: Southern District commenced in 1857 in Brisbane, Northern District was established in 1875 with the court originally located at Bowen and later transferred to Townsville in 1889, and Central District court established at Rockhampton in 1896.

Occasional inconsistencies occur. Where the notice does not make it clear which Court was involved, the field has been left blank. There are a few entries occurring in the Queensland Government Gazette from the Supreme Court of New South Wales. In these cases, Sydney has been entered in the Court field.