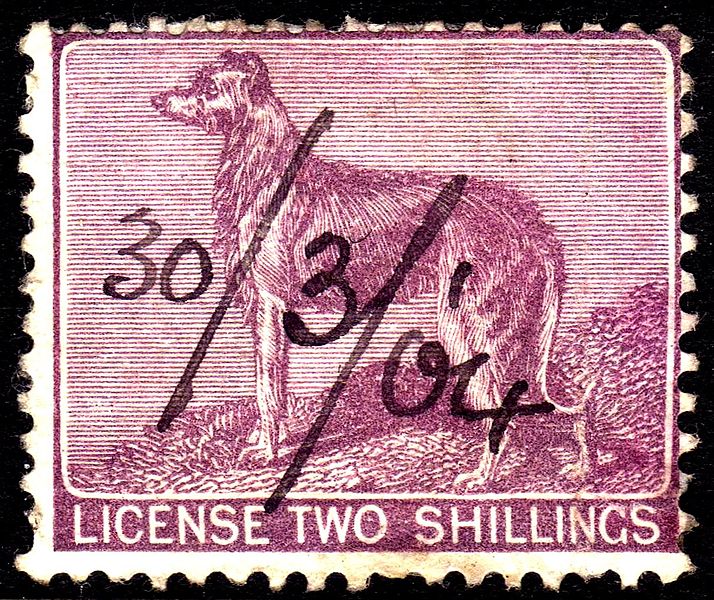 Each record contains a transcript and an image of the original licence register entry. The information given varies but in general you should find out the following about your ancestor:

With these records it’s essential to look at the images so that you don’t miss finding out about your ancestor’s dog. The image will tell you:

In the first year 353, 798 dog licences were issued generating over £35,000 in revenue. Subsequent years saw an average of 250,000 licences purchased. In the following decades, millions of licences were issued. There are 6,041,095 records available to search on Findmypast with more records due next year.

Working dogs were widely and variously used. Collies were often sheep dogs. Mastiffs had first been bred by gamekeepers and were popular guard dogs due to their powerful build and otherwise quiet and loyal temperament. In coastal areas water dogs were in demand including the powerful Newfoundland. Terriers were often hunters as were spaniels.

The dog licences were introduced to make it easier to identify the owners of trouble making dogs, the ones which either worried sheep or damaged property. Once the owners were identified to accept liability no one paid much attention to what the dog was called but dog names do find their way into the records occasionally.

According to the records for Mountrath, in County Laois (known at the time as Queen's County) Prince was a popular name in 1866, as was Captain, Jess and Watch. Names like Flora and Floss were popular for bitches and many dogs had names that seemed more aspirational (Tiger, Hawk, Wolf or Buffalo) or descriptive (Snap, Spot or Coal). There is Curate the yellow greyhound and Brandy the grey and brown terrier. Smaller dogs were known as Gip or Fly and of course, there is Rover.

Pet owning had grown in popularity throughout the 19th century so lapdogs and toy dogs make an appearance. There are Pomeranians and poodles and of course there are those mongrels of uncertain lineage, the faithful mutt, known at the time as a loveable cur. But it’s worth noting that during the 19th century the selection of breeds generally kept as a family pet was far narrower than we are familiar with today, and usually restricted to spaniels, hounds, setters, pointers, terriers, mastiffs and bulldogs.

Even the most pampered lapdog would have had a far more Spartan existence than a modern family pet. Pet toys did not become popular until the 1920s. Dogs would have been fed mainly on biscuits or bread soaked in a meat broth, milk or water and would generally get meat only rarely and in the form of biscuits made from wheat meal flavoured with meat. It was not the 1920s that tinned dog food was introduced.