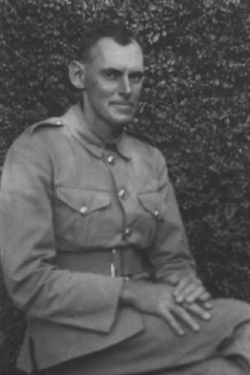 On 1 January 1941 the 21st Battalion sailed for the Middle East arriving in Egypt in about February or March. They saw much enemy attack in Greece. It was reported that the 5th (Erics) Brigade fought with great determination and repulsed heavy attacks at the Servia and Olympus passes before retiring under mist to the 6th Brigade in the south. After a battle at Thermopylae line when the Greek army collapsed the 5th Brigade embarked for Crete.

Their first engagement with the Hun lasted 36 hours by which time it made their position untenable. When the Germans got around them and broke through them with tanks they were cut off, so most of them took to the hills and for two months they avoided capture living a life of hardship. They were joined by other N.Zers and Aussie's but as they waited one night without any sign of help from the sea the Major suggested they "Bunk off" in small parties.

It was reported that a small party of 7 N.Zers and 5 Australians with Captain Saul of Whangarei escaped from Greece in a 20 ft boat. They were captured and sent to a base camp in Germany, and thence drafted out to various working camps, constructing canals, working 10 hours a day for five and a half days a week, for which they were paid 1s 6d a day.

He is buried in the Central Cemetery Graz Austria. Location is Group 52c, Row 16, Grave 3.