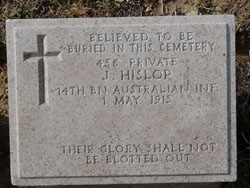 John Hislop, born 1890 in Glasgow to Thomas Hislop and Mary Ann Glass had served in the 5th Scottish Rifles in Glasgow prior to WW1. He was a crack shot and had competed in the King`s Shoot.

In 1914 , John had come to Australia with some inheritance money planning to become a farmer. He was still living in Melbourne when WW1 was declared so he answered the call to arms and joined the 14th Battalion AIF in Melbourne. Several days later, a chap named Albert Jacka , Reg No 465 , joined the same Battalion - we know of his exploits and that he was the first Australian to win the VC- he won it at Courtney`s Post. It is reasonable to assume that John was, for a time, one of Jacka`s Mob.

The 14th Battalion left Melbourne on the HMAT ULYSSEES on 22 December, heading for Egypt for further training after which they were sent to Gallipoli. Upon landing at Gallipoli, they were ordered to take and defend Courtney`s Post, a position that was never regained by the enemy throughout the Gallipoli campaign.

Sadly, John Hislop, No 456, died there on 1 May 1915. A young Scots lad who became an ANZAC. His sacrifice is honoured by a memorial stone in Courtney`s and Steeles Post Cemetery - a photo taken by a relative is included.