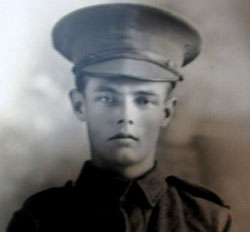 The attached photo is of my grandfather, Eric George Henry Beeston. It was taken in 1916 before he left to join the AIF in Egypt.

He served as a battalion stretcher bearer and was wounded in France. He lived the rest of his life with a bullet embedded in his heart muscle until he died at age 85 in 1976.

He married Elsie Duckwitz in 1923. Because of his precarious heart condition, they decided to have only one child, Muriel Mary Beeston.

Eric and Elsie lived their entire married life in Chelmer, a suburb of Brisbane.