For many years my maternal grandfather, Walter Henry DEIN, faded from family history since 1918, when grandmother, Jane Gamble Dunn defected prior to his return from service, taking my mother, the youngest, and leaving the remaining family; five boys behind.

Grandfather first enlisted in Bathurst, aged twenty three, as a member of 'E' Squadron, with the rank of Trooper, regimental number 2758, in the war in which Lieutenant Harry 'Breaker' Morant became famous. He again sought some kind of regular income security by again enlisting in army service, eleven years after his return from his first enrolment, on October 12, 1916. He returned to Australia, medically unfit, on March 12, 1918, but received no pension.

This year, came the clue I had been so long seeking...a death in Ravenshoe, on October 3, 1938, of a painter, aged 60 years, the only difference, a spelling of the name -- Dean instead of Dein. Clearly, the registrar recording it as it is heard, rather than written. Happily, the birth date was identical, showing that my grandfather had died a natural death, aged sixty years.

The story of how he had travelled so far, and for how long, remains a mystery. However, his burial site has been discovered with a decaying wooden marker.

With the assistance of all the marvellous genealogists who brought the details to light, I am now to receive a small brass plaque to commemorate his Boer War service from War Graves ACT. At the end, a moving tribute to a life for so long unsung.

Photo: photograph of the plaque awarded on behalf of my grandfather, Walter Henry Dein, being displayed on the bell tower of All Saints Cathedral, Bathurst, and the church where he and grandmother wed 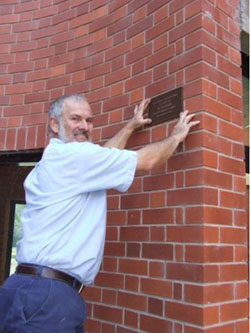