My uncle, 2346 Pte Norman Richard Wight, 44th Battalion of Geraldton Western Australia, embarked from Fremantle with the 4th Reinforcements aboard HMAT Macquarie on 13 October 1916. He served on the Western Front and was killed in action on 4th October 1917 during the Third Battle of Ypres. He was 20 years old.

During the voyage from Fremantle the vessel carrying the troops called at Freetown in Sierra Leone. On returning from leave ashore during the night one of Pte Wight's fellow soldiers fell overboard into shark-infested waters. Pte Wight who was a strong swimmer dived in after him in an unsuccessful attempt at rescue.

On the night before, Pte Wight's battalion left their training camp for service on the Western Front, he was presented with a medal by the OC of his battalion for the bravery he displayed in the incident at Freetown. He asked that his medal be sent to his family in Geraldton where it was received after his death in action. The medal and citation are now displayed in the Birdwood House Military Museum in Geraldton.

Pte Wight's photo is displayed on the Wall of Remembrance at the Australian War Memorial in Canberra.

I have included extracts from the "Geraldton Guardian" newspaper which reported the incidents at the time. 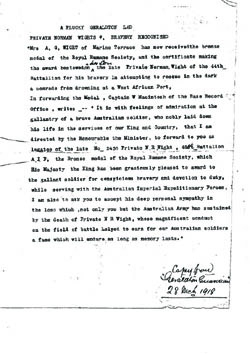