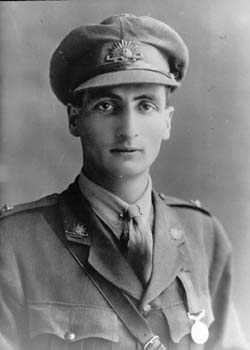 My grandfather, Lindsay George Arnold Good, born 1897, was from a family of eight – five brothers, and three sisters. Three of the brothers were original ANZACS on the Gallipoli Peninsula. They weren’t in the initial landing on April 25th, but arrived there four months later on 6th September 1915.

The family of James GOOD and his wife Mary Annas, nee SILK lived on a farm in an area of South Gippsland, Victoria, Australia known as Goodhurst. This was because Mary GOOD was the postmistress. The name was later changed to Ryanston, and that name remains today.

Lindsay’s brothers – William Barrett Silk (born 1888) and Horace Wilfred Colville (born 1894) all enlisted in the 22nd Battalion of the 1st AIF (Australian Imperial Forces) at Wonthaggi, Victoria. William enlisted on 25th January 1915, Lindsay on 29th January 1915 followed by Horace on 1st February 1915. All three were attached to C Company. Strangely, according to “With The Twenty-Second” – a contemporary history of the 22nd – the Battalion didn’t come into existence until March 1915, yet on each of the brother’s attestation papers it shows that they were assigned to C Company 22nd Battalion.

After training at Broadmeadows camp the Battalion embarked on 8th May, aboard the transport ship “Ulysses”. They were joined by the 21st Battalion.

On 10th June the troops landed in Cairo, where they remained in training until September. It was shortly after midnight on 5th September 1915 that the Battalion first sighted the ridges of Anzac, looming dimly through the dull light.

On 29th October a regrettable incident occurred. About 3pm, a mine driven under the Turkish lines was “blown” under the supervision of a lieutenant who, before the fumes cleared, went below and was asphyxiated. A fellow engineer went to his rescue, but shared a similar fate. Undeterred by these deaths two officers and a number of men entered the shaft and worked on the recovery of the bodies. One was Pte. William Barrett Silk GOOD, who, along with Pte. Stelling, lost his life undertaking this voluntary task. According to a newspaper article in Wonthaggi Horace wrote the following to his mother when informing her of the death of his brother:

“A couple of men went to examine an exploded mine, and were overcome by the gas caused by the explosion. Volunteers were called for, and although there were dozens of volunteers Will was amongst the first half dozen, and went in when the gas was at its worst. The result was that he got it so badly that he did not recover. Will is not the only one who lost his life trying to save others. Two doctors and a couple of red-cross men, Lindsay and I worked on him for two hours trying to bring him round, but he showed no signs of recovery at any time. Even when the doctors gave up we did not like leaving him. He was laid to rest in the cemetery at 7:30 pm on October 29th. Poor Will, he was always thinking of you all, and looking forward to the day when we would all be together again. He died a hero, and you will all feel proud of him.”

Will wasn’t the only hero in the family. On 20th March 1917 Lindsay George Arnold GOOD was awarded the Distinguished Conduct Medal “For conspicuous gallantry and devotion to duty. When an enemy machine gunner killed his sergeant he leaped out and bombed the position, killing the gun crew and capturing the gun. He then rallied the men, and led them in the assault on the final objective.”

Two of the three GOOD brothers returned to Australia at the end of the war. In 1934 the Shrine of Remembrance in Melbourne, Victoria was completed. In August 1935 14 decorated returned soldiers were selected from hundreds of applicants for the honour of becoming a Shrine Guard. Lindsay George Arnold Good was one of the 14!

Photo on the right is of Lindsay George Arnold Good 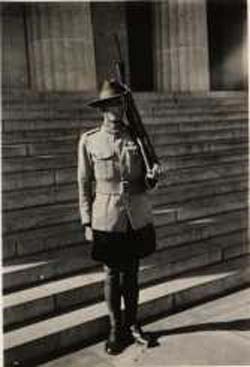 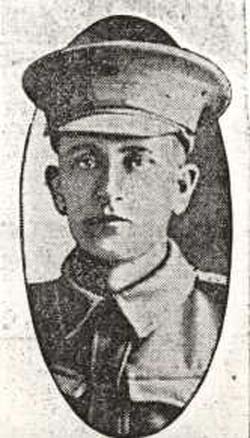 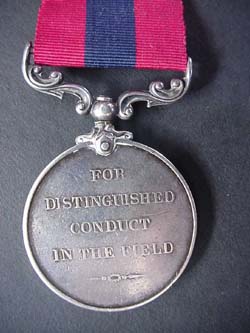 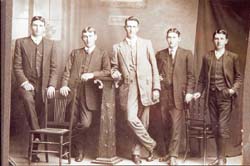