Sydney Victor Hall, enlisted 9-7-1940 Private Army No QX14366 Served in same battalion and brigade as his brother Alaric in Middle East and New Guinea. Was badly wounded at Gona Beach, New Guinea on 23-11-1942 and then discharged.

Alaric and Syd Hall enlisted together and stayed together during the war -Light Horse Brigade. Alaric received a bullet wound to the leg in Syria. Syd was shot in the head in New Guinea which required a silver plate to be inserted to replace bone in his skull. He weighed only 7 stone when he was carried out of New Guinea by Fuzzy Wuzzy Angels.

Both were awarded medals. They served in Syria and New Guinea (Owen Stanley Range, Kokoda Trail).

Alaric went on to Borneo after New Guinea but Syd was so badly wounded he was discharged.

These men are my wife's uncles.

Photo below of William Alaric Hall brushing his horse 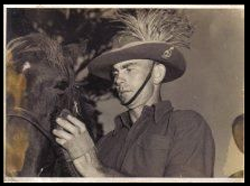