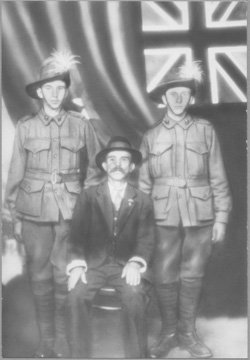 My great uncle Ernest George Watts had only two sons, George Ernest Watts and Frederick Watts. George and Frederick were the couple's only children. On 19 October, 1914, George Ernest Watts enlisted in the 15 Batallion, 4th Infantry Brigade. The next day, on the 20 October, 1914 young Frederick enlisted in the same unit. Young Frederick stated he was 19 years and one month old. His elder brother was 21 years and four months. George was killed in action on 9th May, 1915. He was aged 22 years 11 months.

In May, 1918 Frederick Watts was recommended and was subsequently awarded the Military Medal.

Military Medal
'Is recommended for conspicuous gallantry while in action near VILLERS BRETONNEUX on 5th/6th May, 1918. This man established a listening post within thirty yards of an enemy post. Enemy machine guns were particularly active in the vicinity of this spot, but he pushed out with utter disregard for personal danger, and remained out there until about an hour before daylight, having obtained some very useful information regarding the enemy posts and definitely locating two enemy machine guns which had been troubling our post. As a result of this information both the posts and machine guns were engaged and silenced time after time with No. 36 grenades. His cheerfulness and gallantry throughout the tour of duty in the line greatly inspired all the men around him.'
Source: 'Commonwealth Gazette' No. 15

On 18th September, 1918 Ernest George Watts, youngest son Frederick Watts died of his wounds. Frederick Watts had earlier received a severe wound to his thigh, as a result of a shell fragment. Frederick suffered a significant loss of blood.

Ernest George Watts had joined the armed services himself and was serving as a private at the 13th Hospital at Enoggera, when he received notice of his second son's death.