This is the story as recorded in the letters home from Arthur Ashley FOWLES. The second photo of a soldier with his hat off beside a tree in the bush of his home before leaving in 1915 to fight in WW1. This soldier is Archibald George Stanhope FOWLESS (as enlisted), Arch was killed in action at Bullemore, France in April, 1917. Arthur survived the war unhurt and enlisted again for WW11. I have the stories of Arthur's entire experiences in WW1, fascinating, he writes so well he takes you there, I hope you enjoy the story of the boys who went in to help evacuate the troops from Gallipoli. These two boys are my great uncles, the brothers of my grandfather.

Together with my brother, Archibald George Stanhope FOWLESS (as he enlisted), we enlisted for service on 18th May 1915 at the schoolhouse of Clifton, New South Wales where our father was the headmaster. After training we embarked from Sydney on the "HMAT SHROPSHIRE" on 20th August 1915, both Privates in the 13th Infantry Battalion 1-8 Reinforcements. I having been a Civil Servant and Arch being a Teacher before enlistment.

We sailed via the Great Australian Bight past Cape Irwin, our last glimpse of Australia on 26th August 1915. The next sighting of land was 10th September 1915, believed to be Somaliland, Africa, the following day the Red Sea and on 16th September 1915 we landed at the city of Suez. We were fascinated by the dress of the local Moslem population. On the 22nd September 1915 we were transported by ambulance to Rue Kolmar Station to train it to Cairo, changing at Ismalia.

Whilst on leave in Cairo I visited the Pyramids, Sphinx, Temple of Sphinx, Palace of Khedne, Shepherds Hotel, General Maxwell's mansion and Kas-El-Nir bridge. We were told that the nose of the Sphinx was damaged by French soldiers using it as target practice. I also visited the museum and saw the mummies of Ramases 11 and the Pharoah and jewellery of Cleopatra. In October I visited the Citadel, Tombs of Mamalukes, sultan Hassan, Ibraham Pasha, former sultan, his tomb built entirely of alabasta, value 30.000 pounds.

In October 1915, my company set off for Lemnos whilst I remained in Cairo for Machine Gun School. In early November, after obtaining my 1st Class Gunners Certificate, I was back in Training Battalion. I took a sail up the Nile to the Barrage, actually more like a row as the wind had abandoned us that day. On the 13th November we were taken by train to Alexandria and shipped out the next morning for Lemnos on the "Argyllshire", from here we were to carry out the evacuation of Gallipoli. Our position, Durrants Post, three miles from the beach, saps and trenches cut between the beach and their post.

My first sight of Turkey was at night. The night was dark and occasional star shells threw up the immediate surrounding hills and the occasional rifle shot seemed to me very weird. We were quickly landed and started our three mile tramp. I was very tired and my pack was heavy, yet we soon brightened up. The saps in places were only wide enough for us to pass in single file and it was a new experience for me. It put me in mind of some story that was printed in our old reading books about the Mexican army. The blurred forms of those in front and the silence maintained all the way was certainly out of the ordinary. We were given several rests and we were glad to have them as it was very warm work toiling up the hillside. We got to our position at about 3am and did not trouble to undress but just unpacked our blankets and slept 'under the stars'.

I was awakened next morning early, and soon after Arch (my brother) put in an appearance and so I got up and had a preliminary look around. We were on the hillside and the sea was apparently only a stone throw's distance away. Smaller hill and then valleys in between us and the sea went to make quite a nice view. The nature of the ground was sandy in parts -- clayey ground and one could see in a glance what work the "pioneers" did in the construction of trenches. The trenches were very interesting to see and were made well. In parts they were 7 to 9 feet deep -- including a parapet of sandbags and were very roomy. In wet weather I believe it was a bit uncomfortable and slushy but in good weather the spot was an ideal one. Looking from our trenches towards the Turks' lines, the valley between our hill and theirs was covered in bushes and their hill was a sandy looking one. The dugouts were masterpieces and they proved to be as cosy and comfortable as a bedroom.

The enemy were entrenched on Hill 971, 500 yards away, and of course very little was seen of "Joe Turk". Further round on the right at Quinn's Post, The Pinnacle and Walker's Ridge the lines were much closer. At one place only about 10 feet away and yet every man was got away from every position and I believe the Turks did not discover we had gone for two days after. We heard a rumour that the German version was -- "We attacked and were driven off, the Turks counter attacked and drove us into the sea but the night was so foggy that no prisoners were taken." The humour of that rumour lay in the fact that it was the night after full moon and everything was as clear as day.

Everything was carried out in an orderly manner, and to me the whole proceedings seemed as ordinary as if we were going on a big parade. Our Machine Gun Section was the last to leave the position, and I believe we were the only Section which carried off all it's accessories. I tell you it was no light work carting down the guns -- a gun weighs 60lbs., a tripod 48lbs. and each ammunition box 21lbs., so besides out equipment, pack and blankets, you will form some idea of our load.

We took about two hours to get to our jetty and were put on large two decked lighters -- capable of holding about 300 men -- and transferred to troopships. We got our last sight of Gallipoli at about 1am on 20th November 1915 and next morning woke at Lemnos Island, where we were landed and sent into camp for a fortnight. 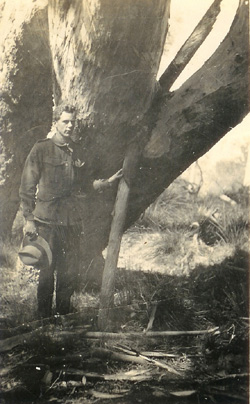