In Memory of George William Coles 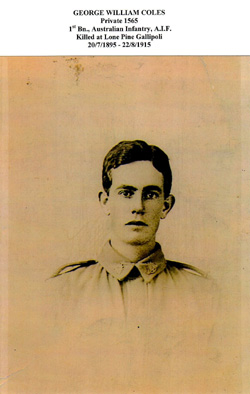 George William Coles was born 20th July, 1895 the son of George and Elizabeth Ann Coles. He was the fifth child and only son in a family of 10 children (9 girls & 1 boy).

World War 1 had begun and on 14th January, 1915 George, aged 19, enlisted in the A.I.F. at Victoria Barracks. He was drafted to Liverpool encampment that same day and there was given 3 months training.

On 10th April 1915, under sealed orders, his Battalion was transported to the Sydney docks where they boarded the SS Argylshire and sailed that day, clearing Sydney Heads at 1.30 p.m. in very calm weather. They sailed south, around the bottom of Australia to Freemantle, arriving 7 a.m. on April 18th.

George's diary reads "At Freemantle we took on board about 400 troop Infantry and Light Horse and 350 Horses. While at Freemantle wharf on April 18th at 9 p.m. we witnessed a huge fire."

With the Freemantle fire vivid in the minds of all on board, the SS Argylshire sailed from Freemantle on April 19th at 6 p.m. Their destination was undisclosed, and troops on board had no idea of the battles, hardship, sickness, and death, they would be called upon to endure. The last entry made in George's diary was made in Cairo.

The battle at Lone Pine was fierce and brutal, casualties numerous, the number of wounded were many. It is recorded that during the month of August the health of the troops who had been in battle for some months was very bad, their physical fitness low, gastritis was throughout their encampment.

Records show that George W. Coles had been treated for acute gastritis during mid August 1915 and returned to his troop just days before his death.

George William Coles was killed on the battlefield of Gallipoli on Sunday 22nd August, 1915, aged 20 years. His body lay on the battlefield and was never retrieved. There is no grave for us to mourn, but his name is inscribed on the Lone Pine Memorial Wall, Turkey. The names recorded on the Memorial Wall are in memory of all Australian soldiers who died in battle, and out of necessity were left where they fell, many later obliterated by shell-fire.

The ANZAC Memorial at Gallipoli reads

TO THE GLORY OF GOD AND IN LASTING MEMORIAL OF 3,268 AUSTRALIAN SOLDIERS WHO FOUGHT ON GALLIPOLI IN 1915 AND HAVE NO KNOWN GRAVES, AND 456 NEW ZEALAND SOLDIERS WHOSE NAMES ARE NOT RECORDED IN OTHER AREAS OF THE PENINSULA BUT WHO FELL IN THE ANZAC AREA AND HAVE NO KNOWN GRAVES; AND ALSO OF 960 AUSTRALIANS AND 252 NEW ZEALANDERS WHO FIGHTING ON GALLIPOLI IN 1915, INCURRED MORTAL WOUNDS OR SICKNESS AND FOUND BURIAL AT SEA.

The battle of Lone Pine takes its place as one of the most gallant Australian adventures in the history of the ill-fated Gallipoli campaign. It tested to the full the courage and the fighting qualities of Australian and New Zealand city and country men who formed the 1st Battalion.

Private George W. Coles was a dedicated member of St. Martins Church of England, Kensington and it was the Rector Rev. Rook who notified the family of his death. The Rev Rook arranged that a Pine tree be planted in his memory within church grounds. It grew into a tall, strong pine tree, noticed by all who passed by, an ever present memory of a young man, beloved son, brother, and uncle. The tree stood outside the church for over 60 years until it died.

The Parish of St. Martin's Kensington obtained a seedling from the Australian War Memorial in Canberra and at 11 a.m. on Saturday 6th August 2011 this sapling Aleppo Pine was planted by the Governor of NSW, Her Excellency Professor Marie Bashir AC CVO, and dedicated by the Right Reverend Robert Forsyth Bishop of South Sydney.

The tree planting marked the 96th anniversary of the battle of Lone Pine, Gallipoli.

The Centennial Park and Moore Park Trust donated a metal tree guard that will protect this very special tree. 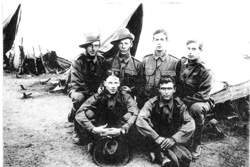