An introduction by Roger Nixon 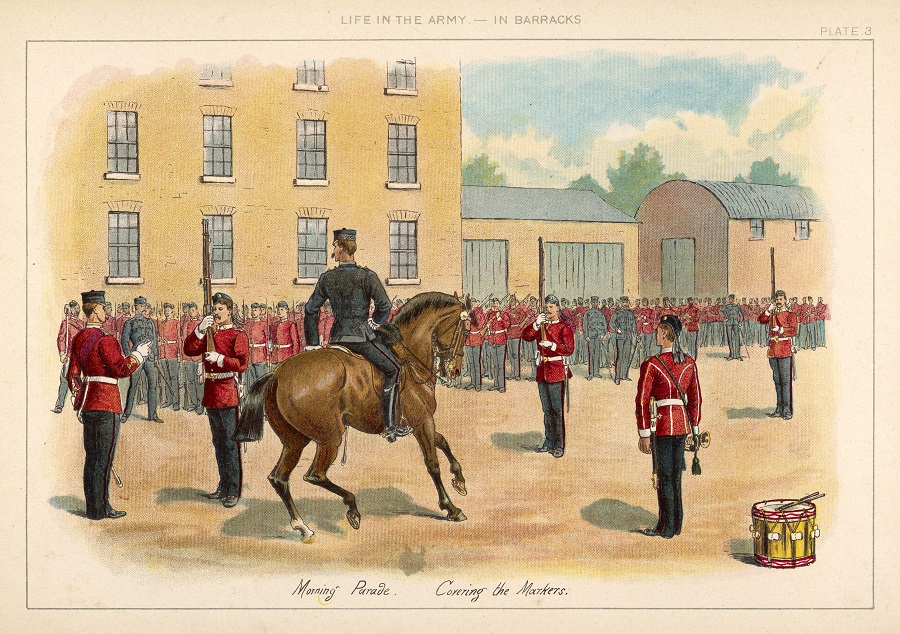 Release of the much awaited 1871 Worldwide Army Index follows on from the immensely popular 1861 edition which Findmypast published in 2011. As before the index is primarily a census surrogate. However, the 1871 edition contains a vast amount of additional data not provided in the 1861 database.

The 1871 Worldwide Army Index has been compiled from the contents of WO10 - WO11 - WO12 Series of War Office pay lists held at the National Archives, Kew, and consists of at least 205,000 entries to which has been added another 36000 annotations. The basic entries indicate name, rank/description, army number, regiment, regimental HQ location (as at 2 April 1871), date frame and National Archives reference.

Many officers enjoyed leave for considerable periods but it is not always clear where they were during their absence. Likewise many soldiers were not stationed at their regimental HQ but were detached elsewhere, some even in other countries. Many were attached to regiments from other units; mustered in army depots; undergoing specialized instruction; escorting prisoners and deserters to and from assizes around the kingdom or themselves have been involuntary guests of military and civil prisons. Some were at sea and a very few were away on furlough. Wherever practical the details of any man not at his Headquarters unit have been extracted including men stationed at the School of Musketry at Hythe, the School of Music at Kneller Hall, Twickenham and the Royal Victoria Hospital, Netley.

War Office pay lists between 1830 and 1877 mostly contain Effects and Credits Returns or Non Effective Returns. These listings from which much additional data has been taken usually indicate among other things the former occupation, birthplace and date, place and reason for discharge of a soldier. Typically, men were discharged to pension; upon completion of a term of engagement (time expired); free (unencumbered and with the grace of the War Office); by purchase; invalidity/unfit/lunatic; by desertion or with ignominy. Some were simply considered to have a bad character or to be worthless individuals. A few were released having been rejected or given a protecting certificate. These were mainly rejected recruits who were given protection from being classed as deserters.

The index contains many references to men being detained. This could mean that a man was held in the guardroom, in regimental cells, a military prison or a civil prison. Unless clearly stated, references to military detention have been ignored. In most cases absence was only for a few days or a week or two. Mention has been made of detention in civil prisons but the records rarely indicate where such establishments were located and they would not necessarily have been close to a regimental HQ. However, knowing of a civil detention will at least offer the researcher an opportunity for further research. Some soldiers who were held in prison away from their regiment are to be found in places like Wakefield Prison which housed erring soldiers under a contract between the county justices and the War Office up into the 1870s, or at Bath or Manchester.

Many pay lists also show men mustered at Millbank (in London). This was primarily the initial point of embarkation of many convicts destined for transportation from Britain. Transportation ceased in 1868 and in 1870 Millbank became a military prison. What has not been easily able to determine from pay lists is whether a man was serving in some capacity at Millbank or whether he was an inmate.

Soldiers did go on furlough – but they were few. However no indication of their leave has been included as the furlough destinations are not indicated in records. Many soldiers enjoying freedom for a few weeks may well not have ventured far from their units. Many regiments were stationed abroad during 1871 and a large number saw time in India. The pay lists for units in the sub-continent differ from those for regiments at home or elsewhere abroad. They do not contain more than scant references to men being added to and departing from a regiment although they do clearly indicate the locations of soldiers away from their headquarters. Most soldiers detached from their HQ in India were stationed away for 1-2-3 months or much longer.

The 1871 Worldwide Army index is an exceptionally valuable source of men who may not be readily located in the 1871 Census. Also, viewed broadly, men serving in 1871 may have been serving as early as 1845 or as late as 1896. This assumes that at one extreme a man may have enlisted as a Boy aged 14, and at the other may have been allowed to serve up to 25 years rather than 21 years.

Records of officers’ service are relatively scant as of 1873 and then do not really offer much until WW1. Whilst the 1871 Worldwide Army Index can only assist in identifying the origins of army subjects it is worth remembering that those of the army ranks (held in WO 97 series at the National Archives and online with Findmypast) only consist of those who were pensioned up to 1882. Indexed material between 1883 and 1913 is a ‘mixed bag’ containing a mix of all types of discharges. It is not entirely clear why this is so but it is possible that the retained records were held pending claims on the War Office. However, more origins are to be found in militia records (held at the National Archives in WO 96 series 1806-1915 but mainly from the 1880s and online with Findmypast) as many teenagers enlisted in the militia and later transferred to the army. 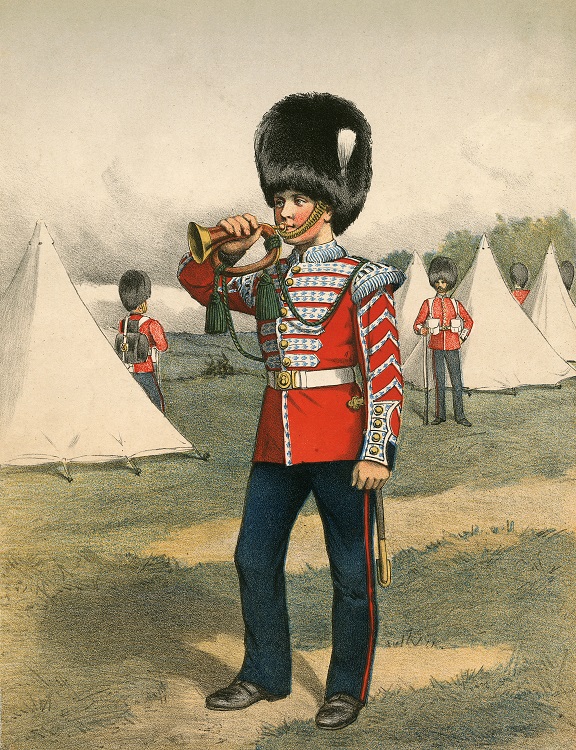 Soldiers were ‘owned’ by the army and could serve for their lives but were generally ‘worn out’ after 21 years and discharged to a Chelsea service pension. That said, men were often discharged to an invalid pension after shorter periods of service where invalidity was attributable to service. A term of engagement might have varied from time to time but many men served 12 years and then took a free discharge without a pension or re-engaged for a further nine years to complete a full term so that they might apply for a Chelsea pension. Not a few soldiers purchased their discharges the cost of which varied subject to, among other things, their length of service. Men discharged for dubious conduct or desertion retained no rights whatsoever.

As already stated the primary aim has been to construct an index confirming the whereabouts of an army subject on 2 April 1871. However, the index also usually indicates where a man was located for the whole of April and in many cases for the whole of June Quarter 1871. In a few instances where the pay lists cover wider date frames men may be shown as early as January or as late as December 1871. In a few instances it has been necessary to resort to pay lists other than for the June Quarter where records have not survived or been available. Officers, surgeons, non-commissioned officers and other ranks including boy soldiers and recruits are included, as are the male and female staff of army schools. School staff sometimes includes NCOs and private soldiers so it is worthwhile to countercheck these when searching.

Great effort has been made to achieve precision and uniformity. However, many problem were encountered whilst transcribing names of commissioned officers as many had hyphenated names which were not clearly indicated whilst, in some instances, names were shown with a hyphen when, in fact, none was justified. Moreover, some pay lists also failed to indicate the first initials of an officer. In an effort to present the correct details the nominal style given in the published Army Lists of commissioned officers has been used as a benchmark where any doubts existed. A great percentage of first names of other ranks were entered in the records in abbreviated form. No efforts have been made to alter abbreviated personal names so Hy Smith (Henry Smith) will be shown as Hy Smith and not otherwise. Army clerks were often sparing in their tasks on this front added to which abbreviations may differ between regiments: One showing Hy and another Hny. A very small percentage of men had aliases. Many men who erred enlisted to thwart arrest by the civil power. When doing so they used a false identity knowing once that once subject to military law the civil authorities would probably not pursue them further. Many such subjects probably completed a term of engagement without the Army being aware of their true names. However, men who had been serving upwards of 10-12 years who intended to remain in service and to eventually apply for a pension often admitted to a mis-statement of name to avoid losing their pension rights. Mis-statements were generally accepted by the Army and an entry would have been made in their records recording the details. Where indicated both names are entered in the index.

One area which has been altered is that of rank descriptions. Here, these have been brought into modern usage thus Color Serjeant will be shown as Colour Sergeant. All abbreviations of rank eg Capt. have been updated to show the title in full. All regiments have been fully described as well eg the 51st Foot will be described more properly as the 51st (2nd York, West Riding, The King's Own Light Infantry) Regiment of Foot except in additional notes which use a condensed form. It is recommended that researchers firstly search for a full name and tick the name variant boxes when commencing a search. Searches of the 1861 Worldwide Army Index may also prove helpful.

Lastly, every pay list was written up by a different person and executed in a unique hand: Sometimes more than one. Apart from all the usual problems associated with transcribing older hands some of the most problematic instances concerned birthplaces, especially those located in Ireland and in Wales. Great effort has been expended to try to identify place names. Not all were totally successful and a double question mark ?? has been added where identification proved difficult. Needless to say many personal names were also very challenging – particularly those of the Malta Fencible Artillery. Again, opinion was always sought either by looking at similar records or by consensus but some have been virtually impossible to properly interpret so may be suspect or remain incomplete but form a miniscule percentage of the whole index. Please note that indigenous subjects of the Ceylon rifles have not been indexed: Only British officers and NCOs. Neither are British subjects serving in 16th, 18th, 19th, 20th, 22n, 23rd, 24th & 25th brigades of the artillery in India. Records of these units may be held at the British Library.

My thanks to Dr Liz Evans and Rosalie Spire for their support in providing technical assistance and support during the construction of the 1871 Worldwide Army Index. Also to military historian Denis Bateman for help to identifying military locations, determining regimental ranks, names and styles and for his patience and dedication in helping to solve all manner of military queries.