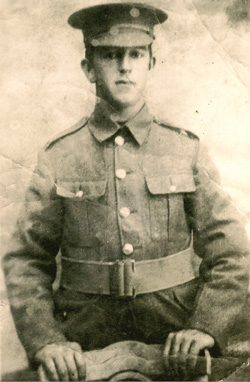 This man is the brother of my grandmother. He was born 24 May 1890 Gisborne NZ to Richard and Catherine Jane Hunt. His father died when he was 8yrs old, and his mother remarried. He was especially fond of his sister Mabel Jane known as May and I included a lovely photo of them together.

Also find a transcription of a letter sent by his nurse on the day of his death, his Army record and a photo of his burial cross.

Dear Mrs Hunt
I am sure you must be longing to hear all the details about your dear boy and although I have only nursed him for this past week, I felt I must write you a few lines and let you know how loving he was and how fond of him we all were.
When I first came to his ward I could see your boy was very ill but he was bright and cheerful and was so glad when he heard that we were New Zealand nurses and he was especially pleased to hear that I came from Auckland where he said his home was.
He spoke to me several times about you and he thought the world of his mother. His eyes shone when he mentioned your name and he told me so proudly that his mother had let him go to fight for his country without in any way trying to prevent him.
I offered to write a letter for him but he said that john ellin?? had already done that for him, and he intended writing himself as soon as he was well.
He never gave up hope, right to the last and he was so plucky
The men in the ward were very good to him, in fact they were so fond of him, they could not do enough for him.
You will be thankful to hear that at the last he did not suffer much from pain, but he was very weak and not able to rally, and he died just nine days after the operation.
We did all that was possible to do for him, but all to no avail.
During the last two days his mind was wandering and in his delirium he was young, through his experiences on the battlefield again and we heard him telling the stretcher bearers to leave him until they had carried ten other wounded men to a place of safety, we are all touched at his unselfishness We admired his memory and we realize he died a heroes death fighting for his country.
we assure you of our .........and and pray that god will comfort you for the loss of one whom he taken to himself.
Preliene? me to be
yours very sincerely
S Clark EVZ
***

BIOGRAPHICAL NOTES * Sapper Hunt enlisted as a Private in the Auckland Infantry Battalion and was attached to the Engineers.

* He was wounded in action at Gallipoli and evacuated to Egypt where he died of his wounds. 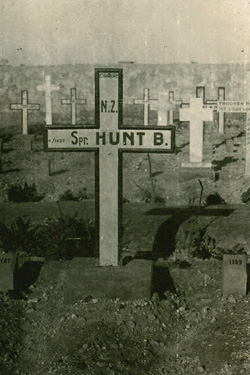 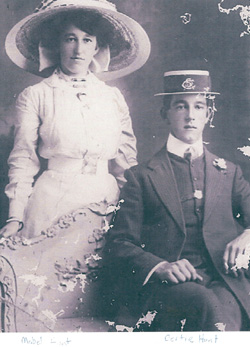