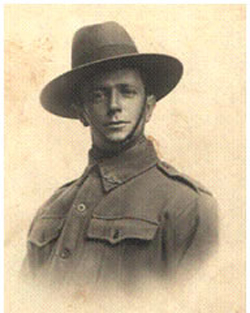 Frederick William Thorn, b. 9 September 1891, Port Broughton, South Australia At the age of 24, he enlisted in the Army for service on 15 June 1916. Service No: 2996. His physical description was listed as 5 ft. 5½ in. tall, fresh complexion, brown hair and blue eyes.

After initial training at Blackboy Hill, Greenmount, Western Australia, Fred departed for Rouelles, France on 9 November 1916 and served in the 44th Battalion. He was wounded there in May of 1918 and was unable to rejoin his unit until November of that year. He returned to Australia on the Somali for discharge on 15 August 1919. Fred also enlisted for WWII, this time serving at Blackboy Hill as a trainer.

One of the lucky ones to come home