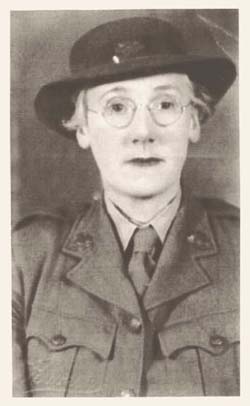 She migrated to Australia on- board the S.S. Makarini as an unassisted passenger from London and arrived 14 January 1914 in Victoria with her father William. Her mother Jane, sisters Jessie Brodie (1892-1974) and Jean Swanston (1902-1990) arrived 15 months later in May 1915 on the S.S. Commonwealth. Her brother Robert arrived in Australia April 1913 aboard the S.S. Wilcannia and younger brother William died in November 1899 at aged 20 months.

She possibly would have lived in the house at 36 Joppa Road, Edinburgh, where her parents lived according to the 1901 census, William’s occupation was listed as, Attendant Working Mines Institute. Later they moved to 34 Bath Street, Portobello, Edinburgh.

During their marriage they moved a number of times and before the Second World War they were living at the Banyule Estate, Heidelberg, Victoria. My father Henry Joseph Malham (1905- 1976) was also employed as a gardener on this property, presumably where he met my mother.

At one stage during the second world war they lived with my mother, my aunt, sister and myself at Camberwell, Victoria. A family story of this time relates that I told a neighbour that I had two fathers - one at the war (my father was a P.O.W. in Java) and one at home (this of course being my grandfather). Not sure what the neighbour thought.

As a youngster I saw my grandmother as one of those old fashioned family members who would like to have children ‘seen, but not heard’ and my grandfather totally different. He had old sayings like, ‘eat your crust because they make your hair grow curly’, ‘eat your carrots so you be able to see in the dark’, and probably the best one, ‘rub a hot brick on your chest to make the hair grow’. He was a fairly easy going, liked a joke and was a great gardener. This could be because of his Irish background. Grandmother was more ‘prim and proper’, possible because of her Scottish background. They say opposites attract, to me in my early years they were opposites. Although this does not seem to have carried over into her army service where she is considered ‘a grand sport’ by her fellow enlistees (see below).

One life changing experience for my grandmother was her enlisting in the Australian Women’s Army Service (A.W.A.S.) on 15 July 1942. One would suppose that if asked why she enlisted she would quote what she said in an article from the 1942 Women’s Weekly, “We must all help in the war for freedom and justice and honour and truth.”

My grandfather had also registered as a volunteer in the Allied Works Council in August the same year, as a truck driver.

The formation of the Australian Women's Army Service was authorised by the government to "release men from certain military duties for employment in fighting units" and was established on 13 August 1941. The Service recruited women between the ages of 18 and 45 and they served in a variety of roles including clerks, typists, cooks and drivers during the war years.

This is a transcription from an article which appeared in the “Australian Women’s Weekly” of Saturday 24th October 1942.

First grandmother in the A.W.A.S

She gets up at 6.30 a.m. after sleeping on a paillasse, and she loves the life. The rest of her family are in war jobs, too.

Her husband is with the Allied Works Council in Darwin, two sons are in the A.I.F., and one son-in-law is a prisoner of war...

Private Siggins doesn’t think she is doing more than her duty. To the admiration expressed by an acquaintance, she replied:

“We must all help in the war for freedom and justice and honour and truth. I feel it is women like myself who should do so, just as much as the younger women. I have brought up my family and so now I am free. The war is as much my job as my husband’s . . . we both feel that.”

The girls in the camp with Private Siggins adore her. She is a grand sport, they say, ready to enter all that goes on, and yet when one of them wants advice or help she knows where to go . . . She calls on the Women’s Army’s first grandmother.

After her discharge she moved to a farm at Wangaratta where my grandfather went after his discharge. Their next move was to Woomera, South Australia. We were never told what their employment was at Woomera. In the 1950’s they left Woomera and purchased an orchard at Mypolonga, South Australia. This was the start of a whole new life style for my grandparents, but they soon found that they needed help with the orchard and invited their son, Stanley Arthur (Stan) and his family to share in the orchard.

However the tragic loss of my uncle in a motor accident in Murray Bridge, February 1957 led to them selling the orchard and moving to small property in Bendigo, Victoria where my grandfather grew flowers, and strawberries, which he sold locally.

My grandparents finally decided to retire and moved to Rosebud, Victoria, in the mid-1960’s. My grandmother died 5 September 1978 at Rosebud aged 82. After the death of my grandmother, my grandfather moved for the last time to live with his daughter Audrey (my aunt) at Heathmont, Victoria and died the 17 July 1982, as the result of a single car accident at Box Hill, Victoria, aged 88. Anne Mitchell (Muter) Siggins lived a full and eventful life in her adopted country and serving it in its time of need.

The photo on the right is of Anne in her uniform 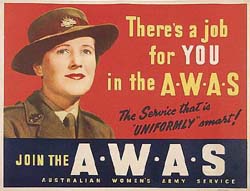 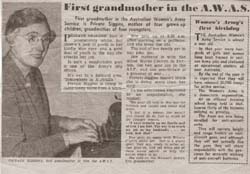 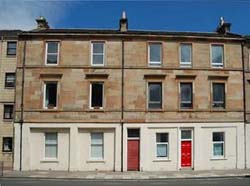