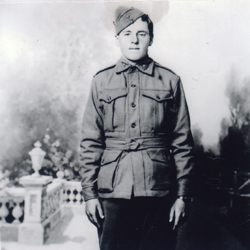 My Mother's uncle, Raymond Monaghan Hayes was the first man from the Snowy Mountain area of NSW to be killed at Gallipoli and there is a memorial park in his name in Cooma- this town is said to be the entrance to the Snowy.

He embarked at Sydney on board HMAT A16 Star of Victoria on 20 October 1914 giving rise to the thought that the unit may have some training possibly in Egypt as this was a British protectorate at the time but I have no proof of this happening, but from embarkation to the first attack on Gallipoli on 25 April 1915 is a long time to be on a ship. Although the horses were not used in this action one has to wonder where they were.

His place of death is given as on the Gallipoli Peninsular on 31 July 1915, he was wounded in the right arm and left buttock in an action at Popes Post on the 26 May 1915 and passed away due to these wounds and his remains were interred in the cemetery at Shrapnel Valley. Age at death; 20.

I have had no personal visit to Gallipoli but a friend who has informs me that it is a most inhospitable place, the remains of the trenches that can be seen today indicate that the opposing troops were not very far apart and in some cases 20 metres would be an exaggeration. It is a complete example of the futility of war when you consider the ground the attacking men had to cover uphill and subject to all kinds of small arms and artillery fire and the Turkish Men, what were they defending ? their Home Land.

The stalemate with the pull out of the Allied Troops should have occurred earlier many families on both sides would not have been left to mourn. Even today the land is declared Sacred and remains of both sides of the campaign show that not all remains were uncovered.

Attached is a photo of Monaghan along with one of the cemetery at Shrapnel Gully, The shot of Monaghan may have been taken not long after his enlistment.

Having spent 22 years in the military it appears that not many questions were asked in 1915.

Photo is of The cemetery at Shrapnel Gully 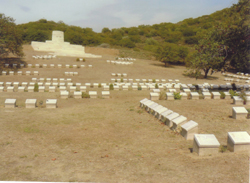