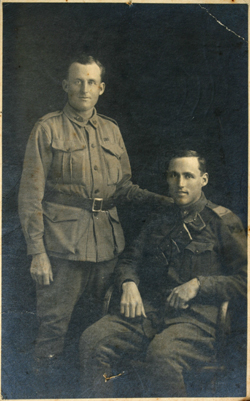 My Great Grand Uncle 2nd Lieutenant Reginald Verdon Hunter MC enlisted at Ballina on 9th November, 1915. He was a surveyor and was 24 years old. He had previously been 3 years in cadets and had attained the rank of sergeant. The photo shows Lucien Blake Hunter (standing) his brother and Reginald Verdon Hunter MC taken on 3rd August, 1917 in London.

He was awarded a Military Cross on 15th July, 1918 I quote from his war records:

"For conspicuous gallantry and devotion to duty. When his battery was being subjected to severe enemy bombardment, causing many casualties he took charge of one gun and acted as a gun member. He and a gunner kept it in action without assistance under incessant shell fire until the order to cease fire was given. He rendered very valuable service under trying circumstances".

He died of pneumonia on 13th November, 1918 2 Days after armistice while on leave in London.

He was my Nanna's younger brother and I don't think she ever got over his death.

They must always BE REMEMBERED.