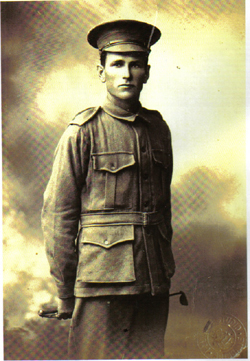 My great grandfather never came home from the First World War. I did not know him of course but some of the stories that have been told about him at family reunions that both my mother and I have attended. He was a real larrikin and true bush hero who loved a great time but also worked hard.

He left Australia in 1916 and served the War in France, he survived a couple of different wounds he received in 1917 but in the closing weeks of the war in September 1918 he received a gunshot wound and never recovered. There is a bridge in central Queensland with his name along with other brave men from the district that did not return. These names are on one end of the bridge and on the other are the names of soldiers that were lucky and came home. The bridge has been rebuilt and has been taken out of service with the road being remade to the west of this bridge.

My great grandfather was an "Expert Shot" before the war having been in the local gun club.