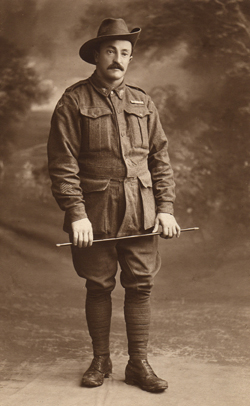 My grand-uncle Josiah ANGOVE was born in 1881 at Vegetable Creek (now Emmaville) NSW, the youngest child of Josiah and Elizabeth (Jenkin) ANGOVE. Josiah was a teamster in Drake (near Tenterfield). He went to Bundaberg after his mother's death in 1914 and enlisted in the AIF on 12 April 1915. He did his basic training at Enoggera in Brisbane.

Josiah was in the 26th Battalion at Gallipoli in October 1915. He was wounded in action in France in August 1916 with a severe gunshot wound to his chest and invalided to England to the Royal Infirmary, Derby. He went back to France on the "Golden Eagle" in December 1916 and was transferred to the 2nd Division Traffic Control. He was again wounded in action in Belgium in October 1917 with a gunshot wound to his right shoulder.

He was promoted to Lance Corporal on 13 September 1918 and returned to Australia on the "Runic" which arrived on 10 June 1919. He married May Sylvia McCalliom in Bundaberg in 1922. He had a daughter Mona and sons Alfred and Robert.