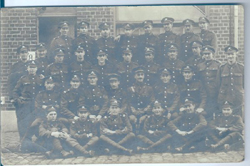 My mothers father William Henry Preston 1895 - 1975 (Pop) tried to join the Australian Army in 1914 but was rejected for some reason. He then worked his way back to England as a stoker and enlisted in the English Army in 1915.

He first served in the Royal Kent Regiment (the Buffs) and then transferred to the Machine Gun Corps. He was demobbed to Australia in 1919 and lived here for the rest of his life and died in 1975 in Sydney.

Photo to the right is of Pop in the Machine Gun Corps.