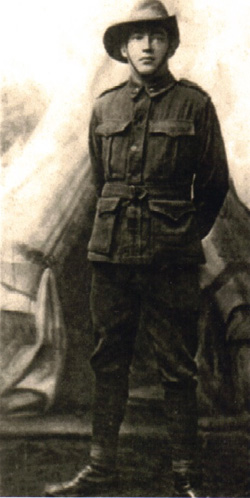 John embarked aboard HMAT "Seang Bee" at Fremantle, Western Australia on 18 July 1916 and disembarked at Plymouth, Devon, England on 9 September 1916. During his training in England he was admitted to the 1st Dermatological Hospital Bulford, Wiltshire, England and subsequently transferred to the Parkhouse Military Hospital for a total of 49 days with an infectious disease.

At the completion of his training he was shipped to France on 28 December 1916 aboard the "Princess Victoria" from Folkenstone, England. On 29 December 1916 he joined his unit at Staples, France and was formerly taken on strength on 1 January 1917. On 22 February 1917 he was admitted to hospital in France suffering a Septic Foot. On 6 March 1917 he was diagnosed with Frost Bite. He was discharged from Hospital on 15 March 1917 and rejoined his Unit on 30 March 1917.

The Axis positions from Doignies to Henin-sur--Cojeul, including the village of Ecoust area, were captured by the 4th Australian and 7th Divisions on 2 April 1917 and he died during this offensive. He was awarded the Victory Medal, the British War Medal posthumously.