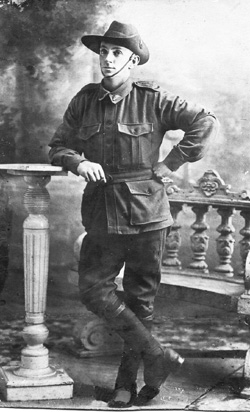 My maternal grandfather, Herbert Austin, was born 22 May 1878 in Baildon, in the West Riding of Yorkshire, England. He was the youngest of 8 children (3 of whom died prior to 1911). He emigrated to Australia sometime between 1911 and 1914 and enrolled in the Australia Army on 4 March 1915. Below is a summary provided to me by my cousin Jeff Austin:

Herbert Austin served mostly in the 57th Battalion AIF (he was originally assigned to 21st Battalion/7th reinforcement and also served as a reinforcement in the 60th Battalion) and from the record of his wounds, we are able to track which military engagements that he was involved in. Below are the dates of these wounds and the places involved --

19 August 1916, Fromelles, France -- Herbert was a witness to the worst day in Australian military history at Fromelles. The 57th Bn were originally in the forward trench and to spearhead the main attack on the night of 19th July but at the last minute they were withdrawn to the rear to rest. When the true extent of the disaster became apparent on the morning of the 20th July, the 57th Bn returned to the battlefield to act as stretcher bearers. With 5500 casualties there were many hundreds of wounded lying in no-mans land and they had to be recovered whilst still under fire from the German positions. With most of the Australian forces annihilated during the battle the 57th Bn took on the role of holding the trenches over the following weeks. Herbert was wounded during this time, he received a mild gunshot wound to the left arm. Watching the Australian positions from the German trenches was a yet unknown soldier, Corporal Adolph Hitler. The Germans recovered many of the Australian dead from their positions and buried them in mass graves. It is these graves which were excavated by archaeologists in recent years at Fromelles.

24 March 1917, Somme, France -- in March 1917 the Germans made a tactical withdrawal from the Somme and back to the heavily fortified Hindenburg Line. The Allies were in pursuit when Herbert was again wounded in his left arm, this time severely.

26 September 1917, Polygon Wood, Ypres, Belgium -- the Australian forces came upon the Germans hidden in concrete pillboxes in the Polygon Wood. Herbert was severely wounded and this resulted in his return to Australia. He received a severe gunshot wound to his cheek, neck and chest. The bullet having grazed his cheek, entered his neck and crossed diagonally through his chest to lodge in the opposite hip. He was formally discharged on medical grounds 26 March 1918.

After discharge, he met and married Ada Jane Riley. They went on to have 6 children (1 dying in infancy). Herbert Austin died in the Hollywood War Repatriation Hospital in Perth, Western Australia on 28 September 1946.