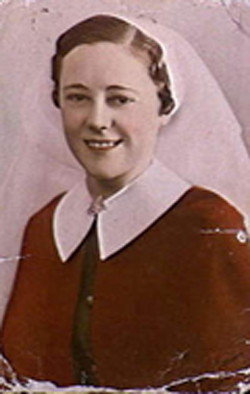 Cecilia was the youngest of six children born to Samuel Delforce and Lydia Elizabeth Ogden of Augathella on the 7th September 1912. She had 4 brothers, Samuel Jnr, Andrew, Austin, and John William and a sister Emma Lydia.

Cecilia parents Samuel and Lydia where married in Augathella in Western Queensland in 1897. The mystery is, why did Samuel leave NSW where his parents had lived all their lives, and his other 11 siblings were living and working the rich mining area around Merriwa [1] near Newcastle? Samuel was working in 1910 at Augathella as a shearer [1].

Cecilia grew up in and around the Augathella area, until she was old enough to gain employment for herself, with her chosen career being nursing. It is believed that she first nursed at Augathella, and then moved to Stanthorpe where she nursed for at least 4 years. The Queensland Electoral Rolls [1] for 1934 state that she was living at the Stanthorpe General Hospital as a nurse. It is believe that Cecilia moved to Brisbane and was nursing there when WW2 broke out, and the call for nurses to go into service, was heard.

Cecilia signed up to join the AANS (Australian Army Nursing Service). Her first assignment was as a staff nurse (Q70207) in Brisbane, signing up on the 20th May 1940, then on 9th January 1941 her appointment was terminated, however she was not ready to go back to civilian life, so she again signed up for service as a nurse with the AIF (Australian Infantry Forces) on the 17th January 1941, Service No. QX19071. She was attached to the 2/10th AGH, and it was with this unit that she embarked to Singapore in February 1941. On arrival in Singapore the 2/10th AGH were sent to Malacca. They were soon helping the soldiers that had been wounded or suffering from tropical diseases. They enjoyed for a few months normal working conditions and delighted in the joys of this foreign land and all it had to offer.

There were rumours that the Allied forces were in trouble and the nurses were warned that they were going to get quite busy as the Japanese were advancing through Sumatra very quickly. The rumours were correct; the hospitals were filling with more wounded soldiers. By early February 1942 the Japanese where air bombing Singapore and surrounding cities. The 10th February saw the Japanese taking over Singapore, storming hospital and taking prisoners. All medical units around Singapore were ordered to pack up as they were being evacuated from Singapore with all the wounded they could take.

Two ships were used to evacuate the nurses and their charges, the "Empire Star" & the "Vyner Brooke". The Empire Star set sail earlier in the evening heading back to Australia. Then the Vyner Brooke was loaded with passengers, nurses, the wounded and crew, by late evening 12th February 1942, only the fatally wounded were left in Singapore. Cecilia embarked on the "Vyner Brooke" with the 2/10 AGH to sail for Australia. They never made it out of the Banka Strait, as a Japanese bomber sighted them as they were weaving in and out of the Islands. On the 13th February the "Vyner Brooke" was bombed and sank at 1425 hrs about 15 nautical miles off Banka Island.

Cecilia found herself floating in the water on debris, she was covered in oil from the engines of the sinking "Vyner Brooke", she had missed the life boats as they were filled with the wounded and the nurses that couldn't swim (most of the life boats were shot full of holes by the Japanese machine gunners). Cecilia drifted with the currents, past islands, bodies, life rafts, but couldn't make it to land as the currents were too strong. After over 18 hours in the water, she found herself washed ashore at the northern part of an island. After recovering from the ordeal she walked up the beach where she found a path that led into the jungle, Cecilia followed it in the hope of finding a village, food and water, but instead she met a lone Japanese soldier who escorted her into Muntok where she was taken as a POW.

Cecilia endured many camps while a POW in Sumatra. The Japanese never classed the AANS as POWs therefore they didn't have to provide them with rations; they were "internees" which meant that the nurses had to find their own food and sustain themselves as best they could. Most of the nurses aside from their nursing duties, started little businesses to get money to buy food from other prisoners or the locals. Some made hats from baskets, others made hankies from scraps of material that was begged, borrowed or stolen, Cecilia cut fire wooden to earn her money, no doubt a skill she learnt while living at home in Augathella Qld. Of the 63 nurses that set sail on the "Vyner Brooke" that fateful day in Feb 1942, only 24 made it back to Australia, Cecilia being one of those 24.

They were then sent to the Army hospitals to recover from their ordeals as POWs at the hands of the Japanese, before returning to Australia On arrival back home, the nurses were treated as heroes. Cecilia Delforce later married Allen Bean McPhee in Wollongong NSW in 1946 and had 2 sons. Her family lived in NSW for many years, but in later years they moved to Broadbeach Waters on the Gold Coast Qld, where she died on the 5th March 2011, aged 98 yrs old. Cecilia's ashes are resting at Allambe Gardens, Nerang on the Gold Coast, alongside her husband. Cecilia was the last of the surviving 24 nurse to pass away and requested at her funeral that she have no flowers as she was not able to bury her friends in Sumatra with flowers so she did think that she would have flowers either.

I have been researching Cecilia's ancestors on and off for 30 yrs, and in May 2010 my husband and I moved to the Gold Coast to live and during that time with work and other issues I never had the time to sit down and dig around in Cecilia's ancestors, until Christmas 2012, and then I discovered that I had missed meeting Cecilia by just 18 months. I was upset that I had not found the time to do her research sooner. I made a visit Cecilia's resting place on Australia Day 2013 to say thank you for your sacrifice and plant an Aussie flag, and I plan to visit again on ANZAC Day. 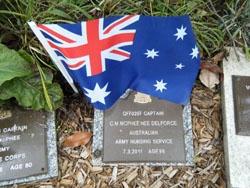 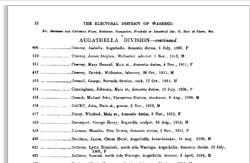 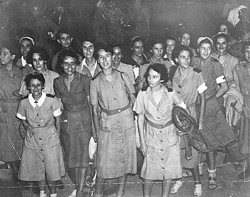